Important Note: Many acupuncturists who have extensive experience treating female infertility modify their protocols, including the selection of acupuncture points, depending on the woman’s phase of menstrual cycle at the time of the treatment. 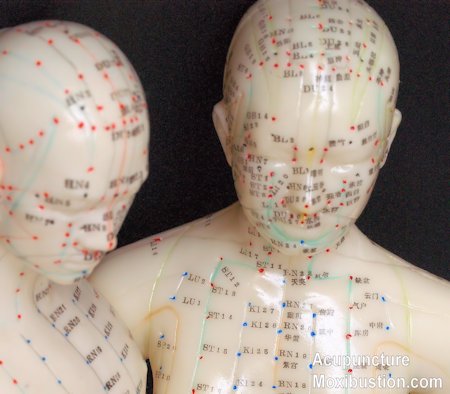 Zhenjiuzishengjing – Classic of Nourishing Life with Acupuncture and Moxibustion

Qianjinyifang – Supplement to the Essential Prescriptions Worth a Thousand Gold

Beijiqianjinyaofang – Essential Prescriptions Worth a Thousand Gold for Emergencies

Unlike the standardized acupuncture protocols used in clinical trials on infertility, traditionally trained acupuncturists use different acupuncture points depending on each patient’s exhibiting symptoms and constitutional patterns based on traditional diagnosis techniques.

It should be also noted that frequency of treatments is also different between a typical fertility protocol used in research and the one used in clinical acupuncture settings.  While the German IVF acupuncture protocol involves only 2 treatments, many Chinese acupuncture textbooks recommend daily or semi-daily treatments over months to treat underlying reproductive health conditions or imbalances.

Most patients manifest mixed patterns (combinations of 2 or 3, or more), the treatment, including the selection of acupoints needs to be modified accordingly Infertility due to blood vacuity Infertility due to kidney vacuity

Infertility due to blood stasis

Infertility due to uterine cold

As indicated on Fertility Enhancing Points used in Traditional Chinese Medicine , traditionally trained acupuncturists use different acupuncture points depending on each patient’s exhibiting symptoms and constitutional patterns. In addition, many Japanese acupuncturists further modify their treatment based on acupoint reaction at the time of needling, instead of simply inserting the needles at the pre-prescribed sets of acupoints.  Since the treatment is highly individualized, selections of acupoints are very wide and vary greatly between practitioner to practitioner, patient to patient, and treatment to treatment.

(by Dr. Haruto Kinoshita, a pioneer of modern Japanese acupuncture)

Suzuki, H. Infertility and Acupuncture Treatment. The Japanese Journal of Acupuncture and Moxibustion Therapies, Vol. 65, No. 6, 2006 Note: Acupuncture protocols used in clinical studies are generally simplified, short, and standardized procedures, because the protocols are developed not only with consideration of its potential efficacy but also by considering its experimental design, budgets, time constraint, and other methodological factors.  They are compromised acupuncture protocols, and often far from those commonly used in clinical practice.

Influence of acupuncture on the pregnancy rate in patients who undergo assisted reproduction therapy.

Each patient in the experimental group received an acupuncture treatment 25 minutes before and after embryo transfer. The needles were left in position for 25 minutes and then removed.

Auricular acupuncture at the following points, without rotation: ear point 55 (Shenmen), ear point 58 (Zhigong), ear point 22 (Neifenmi), and ear point 34 (Naodian). Two needles were inserted in the right ear, the other two needles in the left ear. The four needles remained in the ears for 25 minutes. The side of the auricular acupuncture was changed after embryo transfer. The locations of acupuncture points used in this study are shown in Figures 1 and Figure 2.
Their results showed that clinical pregnancies were documented in 34 out of 80 patients (42.5%) in the acupuncture group, whereas pregnancy rate was only 26.3% (21 out of 80 patients) in the control group. 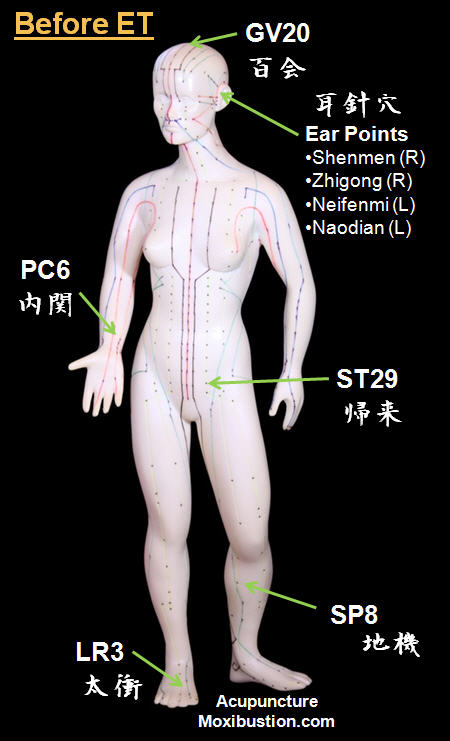 Before embryo transfer, the following Acupoints were used: 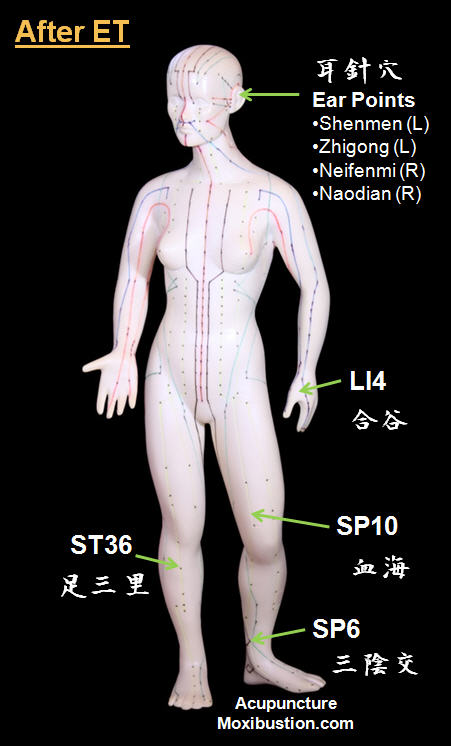 After embryo transfer, the following Acupoints were used:

Paulus WE, et al. Influence of acupuncture on the pregnancy rate in patients who undergo assisted reproduction therapy. Fertility and sterility 2002; 77(4): 721-4.

Since this preliminary study, a number of studies e.g. 2-7 have attempted to replicate their findings using the same or similar acupuncture around embryo transfer protocols (German Acupuncture Protocol), however, the results were equivocal.  A systematic review published in 2008,8 reported a non-significant impact of German acupuncture protocol, based on the meta-analysis of 8 trials on acupuncture during IVF.  An updated meta-analysis of 9 trials by the same research group further confirmed their original finding.9  (about Systematic Review and Meta-Analysis)

Despite the less than impressive follow-up data since the highly publicized initial study by Paulus, et al.,1 the German protocol has been widely used among acupuncturists.  In fact, it quickly became a “gold standard” acupuncture protocol during IVF cycle.

In my view however, the German acupuncture protocol is a typical example of the standardized, compromised acupuncture used in many acupuncture trials, which does not reflect the practice of classical acupuncture and traditional Chinese medicine.

Update November 2018:  A systematic review study on the German acupuncture protocol has been published in October 2018. Based on the results of meta-analysis of previous clinical trials using the German method, the authors do not recommend using this protocol with IVF procedure as this particular acupuncture protocol might negatively impact the pregnancy rate.

Over the past decade, small groups of researchers have attempted to clarify the potential effects of acupuncture on female reproductive organs under strict laboratory-controlled conditions. Many experimental studies on ovarian and uterine blood flow are conducted using anaesthetized rats. The advantage of studying on anaesthetized animals is that it eliminates potential placebo effects and other unspecific influences that are often prevalent in human clinical studies.

Based on both the experimental studies and traditional Chinese meridian theory, it can be considered that selecting traditional acupuncture points located within the areas of reproductive organ dermatomes (T10-L2 and S2-S4) would produce a profound impact on reproductive organs via spinal segmental reflexes.

There are many acupuncture points traditionally used for fertility that are located outside of the dermatomes. Those points are considered to influence reproductive organs via supraspinal reflexes and other known and unknown mechanisms. 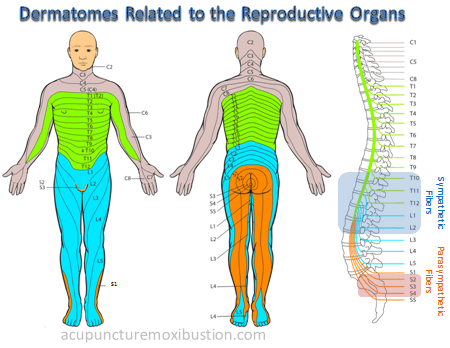 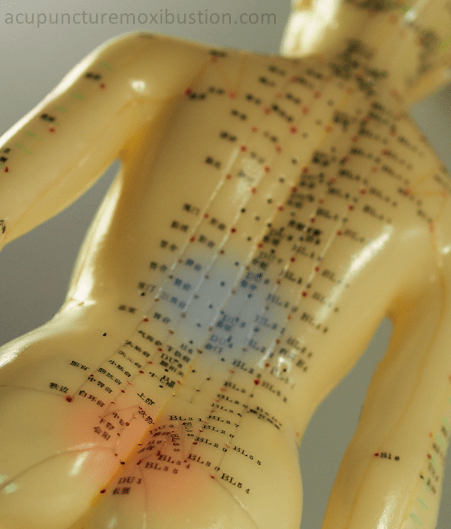 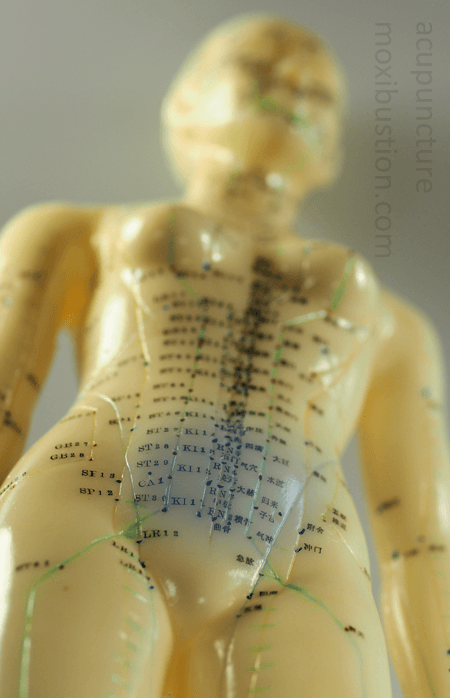